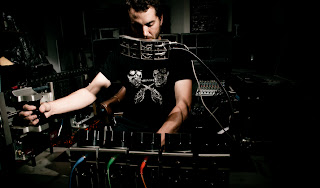 Endtyme in association with Future Noise & The Sleeping Shaman presents…

The legendary one-man industrial doom juggernaut - Author and Punisher (aka Tristan Shone) from San Diego, California - makes his first appearance on UK soil! Shone will be touring in support of the critically-lauded 'Ursus Americanus' full-length, released via Seventh Rule Recordings. The offering reaped the #30 position on Decibel Magazine’s coveted Top 40 Albums Of 2012 list, the esteemed publication noting that “it’s impossible to hear Tristan Shone’s fourth album as Author & Punisher without feeling an essential part of yourself being destroyed and remade in some gloriously awful way."

As a mechanical engineer, Shone is well known for the custom built machinery that he utilizes to create his crushing sonic vision – injecting pure industrial aesthetics into the doom/drone mould with devastating effect.

'Author & Punisher is an industrial doom and drone metal, one man band utilizing primarily custom fabricated machines/controllers and speakers called Drone/Dub Machines. The devices draw heavily on aspects of industrial automation, robotics and mechanical tools and devices, focusing on the eroticism of the interaction with machine.'

You certainly don’t want to miss this!

Manchester’s Gnod should need little introduction, these local legends have gone from strength to strength over the course of their musical career. With 13 albums under their belt, their fusion of Krautrock, Drones and Psych has delighted and entranced audiences worldwide. As official tour support for A&P – it seems fitting to kick off in their home town and they promise to deliver a one off ‘dub’ influenced set for this one!

‘We play slow music using two tubas and amplification, informed (but not limited) by our enthusiasm for drones, doom metal, improvisation and minimalism. We are heavy, but our heaviness comes from the way our bass, contrabass, and subcontrabass sounds hang in the air and relate to their surroundings – natural echoes, natural silences.’

You can expect a split 7” coming soon from ORE and KK NULL on Endtyme Records!